Drive unit
Each of the two drive units comprises a drive with gearbox and two or four friction wheels, a brake caliper and a DC series-wound motor.Two easily interchangeable gear ratios are optionally available for the gearboxes. In addition, the electronic control unit is integrated into the first drive unit; the second one accommodates the hydraulic system for releasing the brakes, pressing on the friction wheels as well as special functions such as the operation of hydraulic lifting beams. Power is transmitted to the rail by Vulkollan-covered friction wheels that are pressed hydraulically against the rail web.

Centre section
The middle section consists of the support frame for the traction battery, which is guided on two separate support trolleys, each with its own brake caliper. 600 Ah or 720 Ah batteries can be used as the energy source. The battery containers are each fitted with 54 CSM high-performance cells and have a battery monitoring device, a main switch and a plug-in device on one end, which automatically establishes the electrical connection when the battery is retracted under the trolley’s carrying frame.

Driver’s cab
The driver’s cabins, located at the head and far end of the train, are each equipped with a driving console, a spotlight and an acoustic signalling system. The driving commands are transmitted to the machine section by an intrinsically safe audio frequency control system.The driving console is located next to the driver’s seat. The driving lever is used to set the driving direction and driving speed and to operate the service and holding brake. For starting and stopping on slopes, there is an additional foot brake switch that allows the holding brake to be used independently of the position of the travel lever. Unintentional running down of the battery trolley or the train can be avoided by first applying an appropriate engine torque via the travel lever and only then releasing the holding brake. 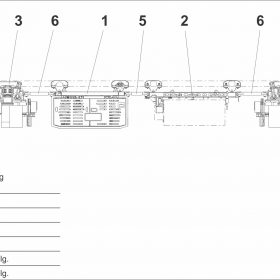 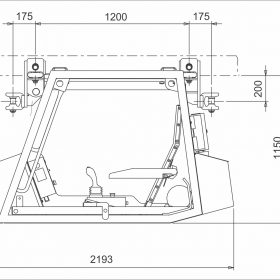 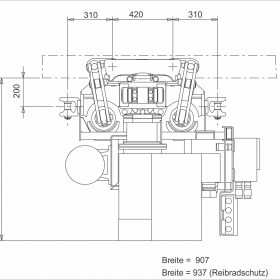 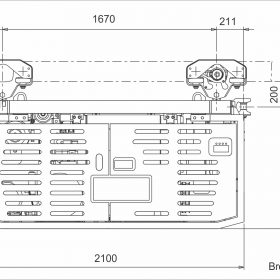 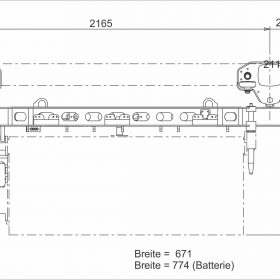